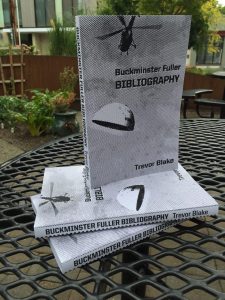 One thousand five hundred entries by and about Buckminster Fuller. Books, magazines, newspapers and ephemera published between 1914 and 2015.

Richard Buckminster “Bucky” Fuller (1895 – 1983) was a public speaker, author, mathematician and inventor. Fuller is best known as the popularizer of geodesic domes in architecture. He attempted to apply the most recent discoveries of science to the most basic of human needs such as shelter and transportation, without regard for precedent or profit or power, doing more with less. He called this process design science. 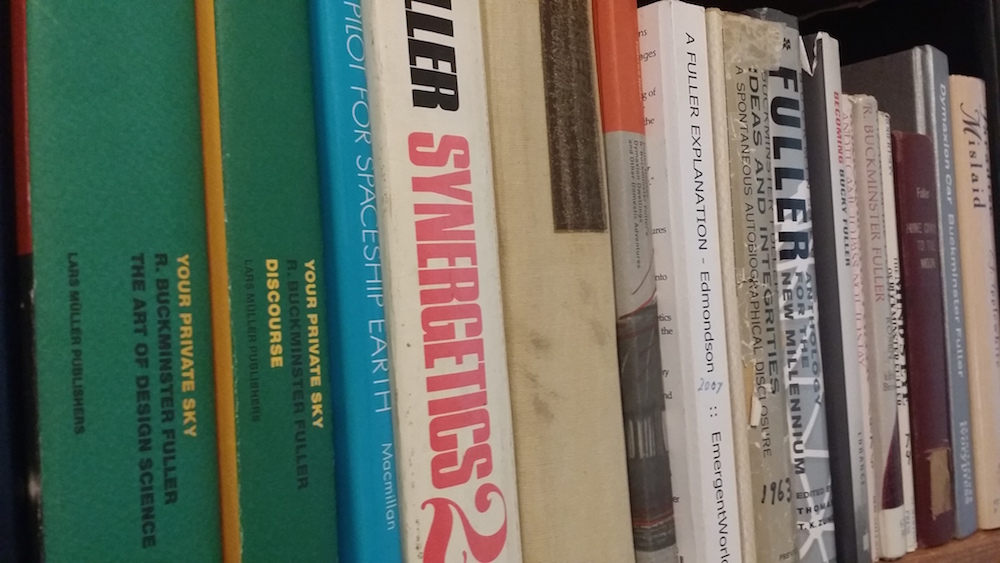 July 2015 would have been R. Buckminster Fuller’s 120th birthday. The man who tried to live fifty years in the future died nearly forty years ago. What did Fuller do during his life, what did he predict about the future, and what are the prospects for humanity? This presentation includes the chance to see many rare Fuller artifacts and publications.

How Much Does Your Archive Weigh? 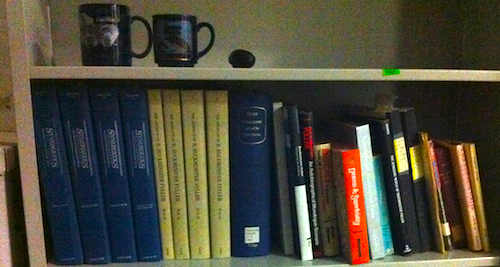 I remember, in 1978, showing [Fuller] our Sainsbury Centre for the Visual Arts and being startled when he asked: “How much does your building weigh?” The question was far from rhetorical. He was challenging us to discover how efficient it was; to identify how many tones of material enclosed what volume.
- Lord Norman Foster, Buckminster Fuller / Anthology for the New Millennium (Thomas T. K. Zung, ed.)

The Synchronofile is now the largest private collection of Buckminster Fuller literature.

In March 2013, Joe Moore of the Buckminster Fuller Virtual Institute donated his collection of Fuller papers to the synchronofile. Combined with the papers already owned by Trevor Blake, the synchronofile is now measured in tons of literature by and about R. Buckminster Fuller. An archive is rightly measured for its content as much as its volume, but access to this amount of material is significant.

As I wrote in my 2008 Buckminster Fuller Biblography: “The pioneering work of Joe Moore and the Buckminster Fuller Virtual Institute were my first guide to what Fuller on the internet might look like. Joe’s work is the standard I have attempted to best, it includes a superabundance of information not found here and I will always be in admiration of it.” I first saw Joe’s work on usenet at bit.listserv.geodesic, before the popularity of the Web. Joe has always been first to answer a question on Fuller, first to publish information electronically, first to encourage further original research. My Biblography was already twice the size of the nearest equivalent. In the months and years to follow, Joe’s archive will be incorporated into my own and the Biblography will expand.

The synchronofile is available for viewing by appointment.


Sam Green & Yo La Tengo will be performing The Love Song of R. Buckminster Fuller on Wednesday 12 September 2012 in Portland Oregon, USA.

Drawing equal inspiration from TEDtalks and Benshi film narration, The Love Song of R. Buckminster Fuller is a new “live documentary” from filmmaker Sam Green. Accompanied by a score performed live by Yo La Tengo, Green will cue images and narrate the film, exploring Fuller’s utopian vision that a design revolution could usher in radical social change.

Green is a documentary filmmaker based in New York and San Francisco. His film The Weather Underground was nominated for an Academy Award, broadcast nationally on PBS, and included in the 2004 Whitney Biennial. He has received grants from the Guggenheim Foundation, the Rockefeller Foundation, Creative Capital, and the NEA. Yo La Tengo is a critically acclaimed indie rock band from Hoboken, New Jersey. They’ve recorded twelve studio albums, written soundtracks to the films Junebug, Shortbus, and Old Joy, and provided a score for the surrealist aquatic films of Jean Painlevé.

The Love Song of R. Buckminster Fuller premiered at the San Francisco Museum of Modern Art as part of the 2012 San Francisco International Film Festival.


Addendum 2016: See BOOKS for more information on Buckminster Fuller Bibliography and other books. 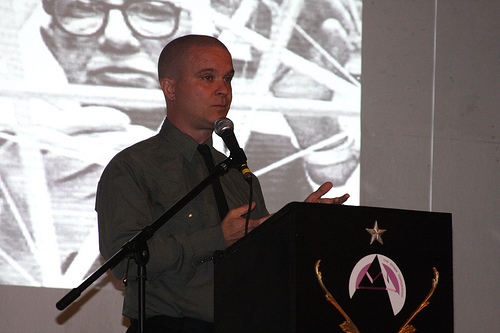 I will be delivering a new version of my one-hour lecture The Approximately Omnidirectional Ephemeralization of Richard Buckminster Fuller this weekend in Portland, Oregon.

Cost: Free! (but buy a ticket and stay for the play after my lecture).

Immediately after my lecture is a performance of R. Buckminster Fuller: THE HISTORY (and Mystery) OF THE UNIVERSE. I have seen this play several times and this production several times. I encourage everyone to please see this play!


Coming up on Monday, 10 November 2008 in the Ellyn Bye Studio: DYMAXION PORTLAND. 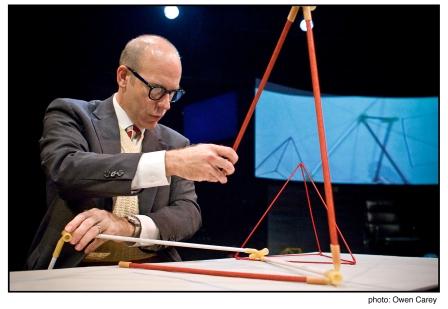 Join some of Portland’s leading thinkers and policy-makers for a discussion on the region’s “Spaceship Earth” challenges (like open spaces and environmental stewardship, renewable energy population growth, equity, sustainable development, climate change, hunger and affordable/adequate shelter). Presented in conjunction with Portland Center Stage‘s production of R. Buckminster Fuller: THE HISTORY (and Mystery) OF THE UNIVERSE.

Also: “The Approximately Omnidirectional Ephemeralization of Richard Buckminster Fuller” with Trevor Blake
Sunday, November 30, 6 pm (Mezzanine).  One of Portland’s resident Buckminster Fuller scholars presents an innovative meditation on the man who urged us all to “do more with less.”

R. Buckminster Fuller: THE HISTORY (and Mystery) OF THE UNIVERSE 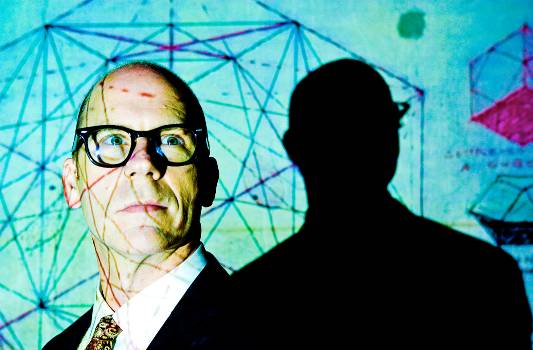 Portland Center Stage is presenting R. Buckminster Fuller: THE HISTORY (and Mystery) OF THE UNIVERSE written and directed by D. W. Jacobs from the life work and writings of R. Buckminster Fuller. The play will run from October to December 2008. I had the good fortune to see this play in Seattle in 2001 and again in Portland on opening night in 2008. I cannot recommend it highly enough.   This play is true to Bucky while being an engaging performance in itself.  I will be speaking before the play on Sunday 30 November 2008. The following is from the PCS Web site, where tickets for the show are available for sale.

Does humanity have the chance to endure successfully on planet Earth, and if so, how? This is the question framed by Buckminster Fuller, the engineer, designer, poet, and philosopher who, among other things, was Mensa’s second president and invented the geodesic dome. Join us for an unforgettable journey inside one of the most remarkable minds of the 20th century in a one-man show that blends videos, lectures, poetry and a healthy dash of humanist humor. A hero of the sustainability movement, Bucky framed many of the great ideas of his time and ours. This is your chance to get to know the man behind the world-saving mission.

[Also,] join us for a series of free panel presentations and informal discussions about Bucky’s design principles and what they mean to the future of Portland, featuring leaders of Portland’s design and sustainability communities.

Trevor Blake: The Approximately Omnidirectional Ephemeralization of Richard Buckminster Fuller.  Sunday, November 30, 6 pm (Mezzanine). One of Portland’s resident Buckminster Fuller scholars, presents an innovative meditation on the man who urged us all to “do more with less.”