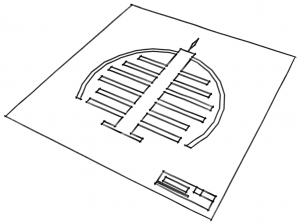 When Fuller was seventeen years old, in 1912, he spent the majority of his annual budget for attending Harvard University in a week entertaining actress Marilyn Miller and her friends. In the course of his revelry he skipped his first mid-year exam. Being unable to pay his tuition and having brought shame to his school and family, Fuller was expelled. His family sent him to work in a Canadian factory to get a taste of manual labor.

In February 1914 a cousin (or a distant relative) of Fuller secured an apprentice mechanic job for him at the then-new Connecticut Canada Textile Company on Rue du Pacifique between Rue Kitchener and Rue Galt O in Sherbrooke, Quebec. The cotton mills operated on a line shaft, where a single motor powered belts which turned machinery throughout the building. Line shaft factories give priority to the belt, not ventilation or sunlight. Dust and noise from the belt were constant. Fuller’s job was to install new equipment and to keep the belt on line. Fuller wrote:

Here I learned to assemble and erect cotton mill machinery. I finally mastered on my own the assemblage and installation of each and every type of cotton manufacturing machine. The installation included running of the pulley-shafting throughout the buildings and its over-all alignment from the power house take-off through to each belted-in and aligned production machine. - letter to John McHale, 7 January 1955.

Fuller claimed his time at the Connecticut Canada Textile Company was his first exposure to industry, metallurgy, drafting and keeping a notebook. While Fuller had invented before, now he saw invention as a marketable skill. Not everything that is invented or marketed comes to fruition. Fuller claimed he designed improved mill machine parts but never claimed that these parts were manufactured, tested or used. Three years later, as a member of the U.S. Navy Reserve Force, he claimed to have invented a crane and hook system to upend overturned airplanes in the water. Fuller claimed this device was built and saved many lives, but no record of this crane exists in his papers or in Navy records.

Between his job at the Connecticut Canada Textile Company and the U.S. Navy Reserve Force, Fuller was re-admitted to Harvard and expelled a second time. The reasons for his second expulsion have never been specified beyond his “lack of sustained interest in the processes within the University.”

Fuller placed himself and his ideas at the center of wherever he was. When Fuller worked for Phelps Dodge Corporation in 1938, he used copper as the standard for measuring human progress in an appendix to his book Nine Chains to the Moon. In 1951 Fuller was the Visiting Seminar Director at North Carolina State University, and the standard for measuring human progress was cotton. In “The Textile Mill of Tomorrow” (American Fabrics magazine Spring 1953), Fuller wrote: “Manufacture of cotton goods is one of the oldest of industrial enterprises. Its mechanical evolution initiated much of the general scheme of specialized and integrated functioning in industry.”

The Textile Mill of the Tomorrow benefits from “a comprehensive resurvey of cotton manufacturing evolution from our great hindsight advantage,” revealing assumptions about cotton mills no longer relevant to an industrial society. For example, in the past a cotton mill had to be near a river to take advantage of water wheel power “requiring translations of power by belting pulleys and meticulous parallelling of shafting in the most geometrically economical patterns.” Pulley shafting is “piecemeal and intermittent,” limiting, requiring precise alignment. The line shaft work that was a point of personal pride for Fuller was an anachronism when carried out by others. Line shaft power transmission was not the only anachronism in the textile mill of the past. Walls and floors were artifacts that made sense in ancient history but which needed to be resurveyed. “Logical for the preservation of the expensive [mill] machinery was its housing: one hundred percent compressively-conceived stone masonry for vertical components, and heavily sectioned wooden platforms for horizontal components.” Walls and floors might provide sunlight to one story but not the rest, and “there was a consequent lack of energy efficiency in providing desirable air conditioning.” The resurveyed textile mill was a negation of Fuller’s experience in the Connecticut Canada Textile Company. In place of a line drive, electric motors. In place of dark walls and floors, a lattice dome and floor that allowed sunlight in every location. In place of stifling air, an open breeze. And in place of noise, a lack of humans to hear noise.

The 90% Automatic Cotton Mill of American Fabrics includes several of Fuller’s interests to date. The building is suspended from a six-sided central mast, as was his 4-D House of 1928. Waste is packaged in the building as waste is packaged in his 1937 Dymaxion Bathroom. Fuller compared man to machinery in his 1938 book Nine Chains to the Moon. He wrote a man is:

A self-balancing, 28-jointed adapter-base biped; an electro-mechanical reduction-plant, integral with segregated stowages of special energy extracts in storage batteries, for subsequent actuation of thousands of hydraulic and pneumatic pumps, with motors attached; 62,000 miles of capillaries; millions of warning signal, railroad and conveyor systems; crushers and cranes (of which the arms are magnificent 23-jointed affairs with self-surfacing and lubricating systems, and a universally distributed telephone system needing no service for 70 years if well managed); the whole, extraordinarily complex mechanism guided with exquisite precision from a turret in which are located telescopic and microscopic self-registering and recording range finders, a spectroscope, et cetera, the turret control being closely allied with an air conditioning intake-and-exhaust, and a main fuel intake.

The “totally new start in cotton mill conception” would be a machine as a man, “similar to the digestive, shunting, secretive, and regenerative process of the human anatomy.” The new mill would not contain men, it would be a man as in der Mensch als Industriepalast. Air circulates in the building in a torus fashion as it did in his Dymaxion Deployment Units of 1940. The outer shell of the building is a geodesic dome (type 2, 16 frequency), a form Fuller had begun to explore at Black Mountain College in 1948. The function of the “robot weather control tower” at the summit of the mill in some drawings is not explained, but it is a tensegrity tower as Fuller had seen in the work of Kenneth Snelson at Black Mountain College in June 1948. In other drawings it resembles the Skylon tower from the 1951 Festival of Britain. Photographs of the four-foot model show several objects at the top: a ring, a spiral, a tensegrity.

Raw material was to be brought into the mill on the ground floor. There it would be loaded into an icosahedral elevator and moved upwards for processing. Each floor would have a specialized function. The uppermost of eight floors (including the ground floor) was for picking, the seventh floor for carding, the sixth for framing, the fifth for spinning, the fourth for slashing and spooling, the third and second for looms, and the ground floor was for storage, office, and shipping of the finished fabrics. Each floor was made up of octet truss frames, strong enough to hold machinery but porous enough to pass the cotton between floors at any location.

The character of the 90% Automatic Cotton Mill was defined by Fuller. The physical model of the mill was constructed by students at North Carolina State University. A photograph by Ralph Mills in American Fabrics shows twelve of the twenty students who worked on this model. They are (clockwise, starting with Fuller): R. Buckminster Fuller, Jeff Brooks III, Ligon Flynn, Al Cameron, Ralph Knowles, Richard Leaman, Bruno Leon, T. C. Howard, John Caldwell, Frosty Coile, Paul Shimamato, Fred Taylor, Sherman Pardue, Jr. Fuller marshaled “all [NCSU’s] architectural students, within the N.C. State Engineering, Textile, and Business Administration Schools and expert consultation” to his project. Fuller’s students toured regional cotton mills and built the model to Fuller’s specifications. It was later described as a ‘fountain factory,’ as raw materials were imported at the base and finished products were exported from the summit. The model is no longer extant but a number of detailed photographs are preserved by North Carolina State University.

The 90% Automatic Cotton Mill was a successful model that remains unrealized, in part and in whole. Although there are thousands of tensegrity sculptures, tensegrity has yet to be used in architecture. Multi-story geodesic hemispheres have been built but none that are suspended from a central mast. The octet truss has been used in roofing (notably the Ford Rotunda dome), as scaffolding that can support suspended weight and in the temporary structures of A. G. Bell such as his triangle tower and Cygnet flyer. But the octet truss has never been used as long-term load-bearing floors. The most realized component of the 90% Automatic Cotton Mill is factory automation.

Factory automation has deep roots in the textile industry. Automated looms of the 1700s were controlled by punch cards. Punch cards were the data storage media for the 1890 US Census, which was carried out by Tabulating Machine Company, which later became IBM. Philip K. Dick wrote of an automated factory in his 1955 short story “Autofac.” General Motors experimented with a ‘lights out’ factory (requiring no humans, no lights are needed) in the 1980s, and the Japanese robotics firm FANUC has owned a robot factory that produces robots since 2001.

[Entire automation of work industry] was always inherent in the intellectual pacing of industry. Its complete attainment is suddenly imminent. Marx’s workers, the automaton, the muscles and reflex machine, is replaced by automation. Man, losing all significance as physical producer, becomes utterly essential to the industrial equation only as the regenerative consumer. The industrial wealth potential of automated production capability may only be realized by an anticipatory designed, systematically established and credit-accounting matching consumer capacity. - Ideas and Integrities

It is easy to demonstrate to those who will take the time and the trouble to unbias their thoughts that automation swiftly can multiply the physical energy of wealth much more rapidly and profusely than can man’s muscle and brain-reflexed, manually-controlled production. On the other hand humans alone can foresee, integrate, and anticipate the new tasks to be done by progressively automated wealth-producing machinery. To take advantage of the fabulous magnitudes of real wealth waiting to be employed intelligently by humans and unblock automation’s postponement by organized labor we must give each human who is or becomes unemployed a life fellowship in research and development or in just simple thinking. - Operating Manual for Spaceship Earth

It was not difficult for the intellectual Fuller to work in a cotton mill. He could not imagine it would be difficult in turn for the average cotton mill worker to become an intellectual. Fuller wrote as workers are displaced by automation they should be given a credit, a fellowship, so that they can consume the wealth now generated by machines. Fuller got his money for college from his family, he got paid by a college to lecture and he got his cotton mill model as free student labor. Perhaps in the same way Fuller projected his own body on buildings, his own experiences on society, his own preferences on the universe, he projected that all those who did not work could get their support from… somewhere. “I see the hydrogen atom doesn’t have to earn a living before behaving like a hydrogen atom. In fact, as best I can see, only human beings operate on the basis of ‘having to earn a living.’ The concept is one introduced into social conventions only by the temporal power structure’s dictums of the ages. If I am doing what God’s evolutionary strategy needs to have accomplished, I need spend no further time worrying about such matters.”